It’s June first, 2020, the day begins with beautiful weather.  The weather was clear, cooler than recently, but pleasant.  I had a hoodie sweatshirt on, a Michigan State “fan” hat, and shorts; I went out for my morning walk.  During this medical shut down I have gained solace and structure with my day by bookending the work I do, whether it be school work or yard work; I begin with a walk, hike, or a jog, and I usually finish the day with a walk or hike.  Often times I put my headphones in and listen to music while I’m walking.  Today, however, it was so clear and beautiful I wanted to enjoy pay attention.  When I have my ears and eyes open all senses respond.  I can smell the blossoming flowers in front of peoples’ houses and the foliage of the epic oaks, hemlocks, and maple.  The sounds of the morning, chipmunks, and squirrels scurrying through dried leaves, the light and delicate disruption of the air as a house finch of robin proceed past to explore in the grass.  Even the distinct sweet taste of late spring basking in the cool air.  I had no desire to distract myself from such glory, so I put my headphones in my pocket as I realized the state of the environment in which I was walking.

I had been walking for about half an hour when I approached a crosswalk. I began to cross, catching in my peripheral a dark vehicle that was traveling down the road, I do not allow people to bully just because they are in a car.  This forced the driver to slam on their brakes just before the crosswalk; that was not their last mistake. Their next mistake was they begin blowing their horn.  I understand this drive was ignorant.  Most importantly, they were ignorant of who I am, and honking at me at this time was the wrong thing to do.  I stopped in the middle of the road, blocking his ability to proceed.  I began pointing at the crosswalk which was very obvious and well painted, I pointed at the bright sign that indicates that it is against the law to not stop for pedestrians in the crosswalk he continued to honk.  Sarcastically, I apologized in an animated manner with grand gestures but remained in the middle of the road.  I was not gratuitous about the amount of time I was remaining in the road, but I was obnoxious.  He was yelling something at me, but I couldn’t hear it over his horn; I can imagine what he was saying.  The last mistake he made in this scenario was to get into a battle of wills and wits with me, I replied to whatever it was he said, “We should drop our pants and compare.  That way you can prove exactly how much of a bigger dick you are; I’m sure it’ll make you happy.”  By this point, I had moved enough in the crosswalk so he could proceed.  He then drove his BMW with a black and orange New York license plate; which reminds me of a joke: What’s the difference between a porcupine and a BMW.  With a porcupine, the pricks are on the outside.

About 30 minutes later, I returned home, carried on throughout my day with school work, classwork, classes, and meetings. I did some more yard work in the afternoon just before my last meeting of the day, which lasted a 20 minutes past for what it was scheduled, but that’s okay, it happens.  I then took a long walk in the evening.  While I was walking I acknowledged a neon yellow sign in front of me that indicated crosswalk approaching. I was approaching that crosswalk. The sidewalk on which I was tracking was to stop. 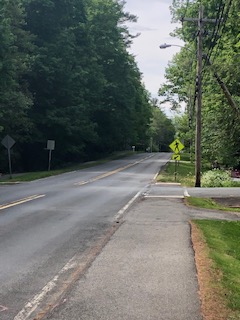 In order to get on the next sidewalk, on the other side of the road, I needed to cross the road being alerted by the sign.  Of course, I considered having been almost struck this morning, in a crosswalk; I couldn’t imagine I would almost get run over again, but I did.  I will grant that this crosswalk was faded, but the sign was conspicuous.  I noticed this driver was from New York State.  The driver in the morning was from New York State. Hmmm, maybe New York State drivers don’t stop for crosswalks?

I know that this is not exclusive to New York drivers, because one of my sisters was hit by a car while she was in a crosswalk in Florida by a Florida driver. This second vehicle was in Infiniti SUV.  I don’t recall what kind of vehicle struck my sister in Florida, however, today it looks as though luxury car drivers feel as though they on the road and they don’t need to pay attention to or obey the rules of the road.

Speaking of people who seem to believe as though the rules don’t apply to them, as got into the center of town I noticed a few things that were not present that morning. I noticed there were signs posted all over town.  On trash bins, 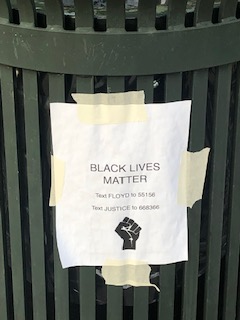 and on fences. Normally, I am very skeptical about doing what these signs were suggesting.  Frankly, I’m skeptical of these being scams. I don’t know enough about scam technology and cell phones to quite understand how it could be a scam, but I often figure these to be scams. However, before I came to the second sign I had already texted both messages, as described on the sign.  I figured, ‘What’s the worst that can happen?’  I know the best that can happen is it can be a good thing and a worthy thing!  So it’s worth the time and effort.  As I have expressed it is our responsibility to do anything and everything that we can to support and insist upon justice, responsibility, and do what is right.  What is not right is to ignore what is happening and pretend that just because of what is happening in the country (or even in the world for that matter) that the problem is not yours.

People with power, people with money, people who drive luxury vehicles use their power to insulate themselves from danger.  People who are white have intrinsic power that power hides and insulates them from dangers.  As the power of driving a vehicle, there are laws that govern these structures, speed limits, stop signs, and crosswalks.  When the vehicle is permitted to ignore the rules or what is right and safe for all, it is dangerous and chaotic for all.  Please understand I am not trying to compare my role as a pedestrian to have the same struggles as minorities who are still being horribly damned by the systemic vehicle of the American society.  In fact, I hold that if I don’t use the insulation of being white, which gives me permission to speak freely I am part of the problem.  It is terribly upsetting that there is such an entrenched power struggle that allows power to be held by the ignoring system.  If someone cannot see this system, they are ignoring it.

Cesar Chavez fought for the education of the isolated and the oppressed.  The minimalized shoulders have been stood on.  Their culture and their struggles has been the bedrock to hoist up corporate greed designed to oppress.  Chavez understood this: “Once social change begins, it cannot be reversed. You cannot un-educate the person who has learned to read. You cannot humiliate the person who feels pride. You cannot oppress the people who are not afraid anymore.”  This needs to start at home by WHITE parents to not ignore their roles as the first teacher of society to their children.  This needs to be at home by WHITE parents to instruct their children to not ignore and normalize systemic benefits.  This needs to be taught through progressive curricula in schools in ALL communities across the country.  This is not a “them” problem it an ‘us” problem.  When I say an “us” problem, I elevate that to be a US problem as in a United States problem.  We all need to be united to not ignore and be ignorant to the plight of all who are our brothers and sisters, our neighbors, and most importantly, our children.  Like capturing a pest in a live trap, now you own the problem.  The chains of slavery that still restrict “non-white” is the cage, the white “man” owns the problem, but the problem is not the black “man” it is the cage that the white “man” owns.  The white “man” owns the problem, it is “his” problem to solve.  I know that what I need to do is not allow the ignorant to continue not acknowledging the problem, teach my daughter about her privilege and plan for her individual growth toward doing the right thing, as a teacher help my students to see the truth in their lives and understand how to hold their lives high as something that should be honored, and as a member of the United States community speak out toward laws and standards that will benefit all not just me.

Nelson Mandela’s words help to amplify my sentiment, “Education is the most powerful weapon which you can use to change the world.”  We all need to learn love.

Please take the time to re-post this blog, or at the very least steal these pictures and post them on any and every Social media platform you are involved with.

As a passionate educator I am distressed when I am not instructing in some way. I love to share my ideas and this has turned into work as an author. I am a loving father, brother, uncle, son and friend to many. Everything I can do I do to improve the lives of others and try to share my passion to help change the blights the world endures, one interaction at a time. View all posts by Keith Harrison

1 thought on “My day ended with the mourning”